Punjabi Cinema has a lot things to show up but still at a point it does lack a thing that is called as “creativity and boldness”. This is because of the fact that you need guts to do a thing that has not been done before in the industry, every director wants to play safe in the industry as making a movie takes a lot.

Getting bad results does not mean that you did wrong but it is that you get a lesson that how you could have served this story in a much better way. And now we are going to see another great experiment through upcoming Punjabi film “Jugni Yaaran Di” which is directed by Sagar S Sharma and is a story of a college in which two friends and a girl. The poster of this film is out and looks really interesting and catchy. Director Sagar S Sharma has previously directed super hit film Burraaahh and Heer & Hero, and now he is coming up with Jugni Yaaran Di.

Star cast of the film is Preet Baath, Deep Joshi, Mahima Hora, Siddi Ahuja, Akshata Sethi and others. The film has not only targeted an entertainment packed story but also has the latest star cast which has a crisp and artists purely related to the acting field. 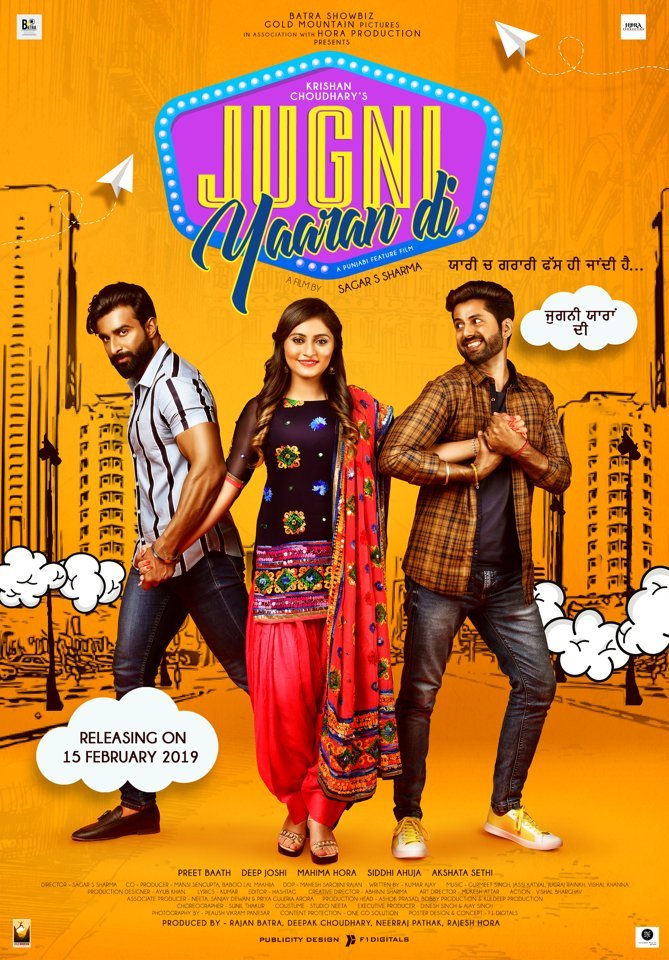 Preet Baath is a great actor who has lead a Punjabi movie directed Hollywood Director by Kavi Raz, “Kande”. Most of the people who have watched this film said that it does not seem that Preet is doing acting for the first time or he is new to the industry. He is not from acting background but belongs from a family who has a number of Police officers and lawyers filled up. He has also done training in law but more in love with his acting and art. Preet Baath has also acted in an English TV series of Times Now channel named as “Emergency Room 1066” in the role of a doctor.

Mahima Hora, the lead actress of this film is going to step in Punjabi Industry from this film, she is from Delhi but Punjabi by heart. She has done various ads with some big brands, from where Rajan Batra approached her and signed her for the film, he said that she is not only a pack of beauty but also have great acting skills. MahimaHora is not only an actress but also a Judo Player of state level, she is also not from acting background but has always loved acting and movies. She is also the brand ambassador of Raj in Bhatar Abhiyan running in Mumbai.

Both of these artists to lead movie Jugni Yaaran Di along with Deep Joshi, who is also a brilliant actor and has worked in movies like Bathinda Express and he has previously worked in a movie with director Sagar S Sharma. Both actor and director have a great tuning with each other which makes it easier to handle things and make a perfect film. Deep Joshi to also act in another upcoming Punjabi movie “Singham” which is a remake of Ajay Devgun’s Bollywood film named under the same title, this film will also be produced by Ajay Devgun. The film will be releasing on 19th July 2019.

Along with this, we will see stars like Rupinder Rupi, Manjit Singh, Jatin Sharma, Akshit Sethi and Mohit Bhaskar will be seen. Also, Siddi Ahuja will also be making her debut in Punjabi industry through this film.

The story of Jugni Yaaran Di is penned by Ajay Sharma and will be releasing under the banner of Batra Showbiz, Gold Mountain Pictures in association with Hora Productions. The producers of the film are, Rajan Batra, Krishna Chaudhary, Neeraj Pathak and Rakesh Hora. And co-produced by Mansi Sengupta.