Kaka ji is the name of upcoming Punjabi film 2019 that will be starring very talented Dev Kahroud and Aarushi  Sharma along. The film is directed by Mandeep Benipal who is well known in the field of direction because of his hit films like Ekam- Son of Soil, Sadda Haq, Yodha, Desi Munde and Dakuan da Munda.

The poster of the film has been released and along with the name Kaka ji it contains a tag like “Son of Royal Sardar”.

Produced by Ravneet Kaur Chahal and Rajesh Kumar this film will be releasing under the banner of Ravneet Chahal and Dream Reality movies production house. Music in the film is given by Laddi Gill, Gurmeet Singh, and Ikwinder Singh while lyrics are penned by Amar Kavi and Gill Raunta.

Dev Kahroud is known for many Punjabi movies like Dakuan Da Munda, Rupinder Gandhi- The Robinhood and many more movies. He is well known for is action and different style in the industry.

Dev Kahroud has previously done theatre in starting of his career and under the direction of various well-known legends of theatre like Balraj Pandit and Samuel John etc. He entered the industry as a leading actor of film Rupinder Gandhi-The Gangster and which was blockbuster hit of the year 2015.

Aarushi Sharma is a very beautiful actress and model, also a beauty pageant title holder as well. She is from New Delhi. Aarushi Sharma has taken part in Senorita India pageant at which she won a crown of Miss Intercontinental India in 2016.

She has been appearing in various Punjabi music videos since 2017 as a model like Aa Chak Tera Challa by Sajjan Adeeb, Very famous song of Jaani and Ammy Virk Hath Chumme and many more. And now she will be appearing in Kakaji opposite DevKahroud.

The first look of Kaka ji Punjabi film looks interesting, poster contains both hero and heroine i.e. Dev Kahroud and Aarushi Sharma standing with each other. 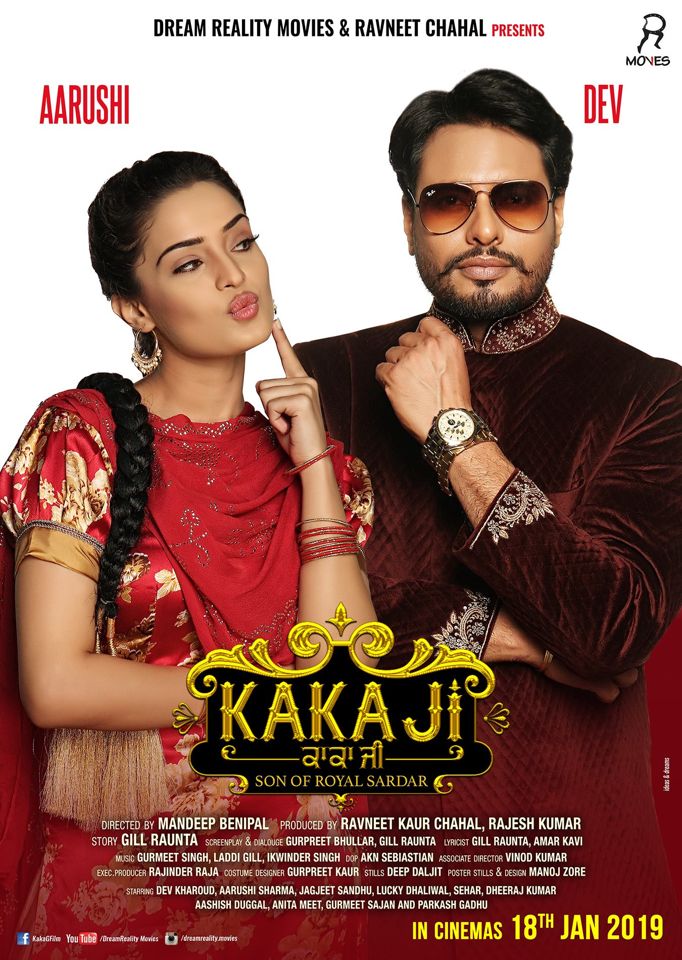 While Dev is standing hand fold and Aarushi is in Punjabi suit and making a pout towards him. Both are looking awesome together and along with this, the poster contains additional information about cast, crew and basic knowledge about the team behind this film.

Trailer of this film has not been released yet.

Kakaji will be hitting cinemas on 18th January 2019