Kangana Ranaut is one of the most beautiful and charming faces of Bollywood cinema along with this, she is one of the highest paid actresses in the industry.

She is known for her brave personality, the why she speaks in media in favour of someone if one is right moreover she is never afraid of speaking against the one who is not, according to her. She further puts her true and genuine reason in front of media which means, in front of the world. This is what about her personality that makes her different from the whole industry.

Kangana Ranaut was born in a small town Bhambla (now known as Surajpur) in Mandi Dist. of Himachal Pradesh in a Rajput Family. Her mother Asha Ranaut is a school teacher and father Amardeep Ranaut is a businessman. Kangana has two siblings, a younger brother Akshat and elder sister, Rangoli who also worked as her manager as of the year 2014.

Kangana grew up in a joint family, basically a male dominant family, although she tells in an interview that she has seen the dominating male behavior over the women in her own house. Moreover she says that a girl is just treated as a woman that is going to live a particular life of a housewife, hence she was treated just under the same training but there were times when she fought back for this treatment, although she fought for her own dreams that were much higher and developed than this so-called male dominant thinking.

She says that she was stubborn on certain things like if her father gifted her brother a toy gun and she was gifted a doll then she would probably didn’t accepted that shit further she argued back for this discrimination between the gender. Not only this but she was also very choosy about her clothes and dressings, Kangana hated to wear that old-fashioned dresses that were expected from her, she wore accessories and dresses that were into fashion, which would seem Bizarre to her housemates and neighbors.

She has done her schooling in DAV School, Chandigarh where she continued with the science as her main subject but failed to pass in chemistry in a class test, she went for the science just because her parents wanted her to become a doctor but failure in a unit test led her to choose her own path as she was very serious about her studies along with this she used to be very curious about her results but still had these bad results.

Hence these incidents lead her to find her true destination by herself. Keeping this in mind she shifted to Delhi just in the age of 16 years. Her decision of being relocating to Delhi was not accepted by her parents; her father considered her as aimless and refused to sponsor her anymore.

At this point of time Kangana could left Delhi and went back to her home along with her dreams that were going to break in her home back but she never had a word “quit” in her attitude. Once she got a suggestion from the Elite Modelling Agency, who were impressed by her looks to work as their model with them.

She accepted some of the assignments but then felt that the career of model is not good for Creativity and it really lacks scope for her. Leaving modelling behind, Kangana went for acting and joined Asmita Theatre Group. There she took training under director Arvind Gaur.

During this journey she participated in many plays and went through many bad phases of life. Once during a performance one of the male participants went missing and Kangana played both the roles in the play, his role also along with her role of a woman. Positive response from the audience after this act of hers encouraged her to go for more opportunities in the city of dreams, Mumbai.

During the Mumbai period Kangana went through much lack of money and survived only on Bread and pickle for a long time. She refused to take any advantage of his father’s earnings which lead to dispute between their relations. Not only this, also no one in her family, nor in the relatives was anybody who liked about her going in the acting career and did not talked to her for several years but after the release of her movie Life in a…Metro in year 2007, she made things sort out.

Kangana Ranaut made her debut in 2006 in the thriller “Gangster” for which she has won Filmfare award for best debut female. After this, she was praised for her several movies like Wo Lamhe in 2006, Life in a…Metro in 2007 and Fashion in 2008. For all these films she was awarded the National Film Award for best-supporting actress role and a Filmfare Award under the same category.

Kangana Ranaut also featured in some of the very big hit films which were commercially successful as well, some of them are Raaz: The Mystery Continues in 2009, Once Upon a Time in Mumbai (2010), including a comic role of a self-possessed girl opposite R. Madhavan, who played the role of Kangana Ranaut husband role in Tanu Weds Manu which was one of the greatest hits from her career. But along with this she was going through a good and bad time as well, as she had many offers for the movies but at the same time it was very difficult for her to choose the movies those she can do better according to her personality, hence in this confusing period she did movies like Game, Double Dhamaal, Rascals and Miley Na Miley Hum in 2011, other than Double Dhamal, all the movie from these four came out to be flops. Another movie in the same year she did with Ajay Devgan was an action thriller movie “Tezz’ which was another flop. 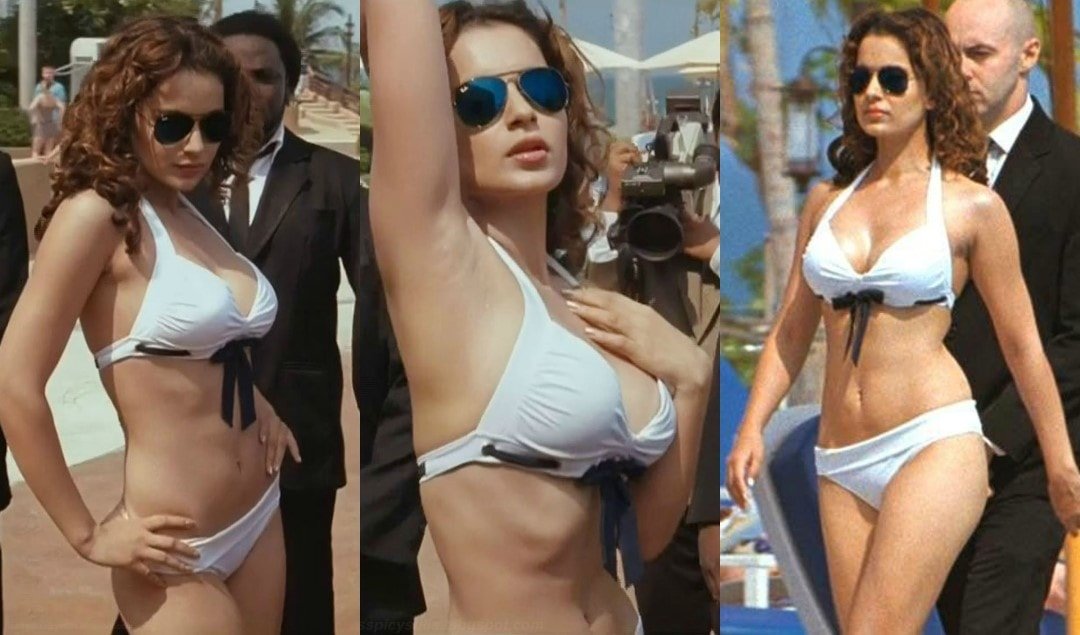 Kangana was casted by director Sanjay Gupta; in opposite role with John Abraham in a crime thriller film “Shootout at Wadala” which came out to be kind of success in box office. After this, she appeared in a Koi Mil Gya Series moreover a science fiction series, Krrish-3 in 2013 in the role of a character called as Mutant opposite Hrithik Roshan.

The movie that changed her life for better was “Queen” in 2014 in which her character was loved by the audience and the whole story was revolving around the same, she became very popular, was successful in making media and audience both happy on the same time with her work. Queen was a super hit at the box office. Although, she won Filmfare and National Film Award for her performance as best actress in the film.

The thing was this in this film she played dual role, both of the characters she played had a great difference between their nature, language thereafter the role as well which made her more famous and close to many hearts. For this she received Filmfare Critics Award also, second consecutive National Award for best actress.

In 2015, Kangana Ranaut was seen in romantic comedy tales I Love NY and one Nikhil Advani’s Katti Batti, both of the films, unfortunately, failed at the box office.

After a break from the big screens Kangana Ranaut did her come back as in role of Julia, the character was of a stuntwoman and a heroine of 1940’s time in Rangoon movie of Vishal Bhardwaj opposite Shahid Kapoor and Saif Ali Khan, during the shoot she not only did her stunts by herself but learned some skills like horse riding and some of the stunt points too.

She had fewer scenes in the movie but still came out to be the best part of the story, although the film got mixed reviews and failed to impress much audience because the script of the movie was never up to mark. Now in the list of her recent films, we have recently released movie “Simran” released in September 2017 but somehow failed to impress the audience as the character of Kangana in the movie was very similar to those in Tanu Weds Manu, Queen and Tanu Weds Manu Returns. This was the reason behind the failure of Simran.

As far as future plans of Kangana, it is going to be very interesting, as this is the first time that audience will be having Kangana as Manikarnika-The Queen of Jhansi, yes you guess that right, it is an epic biopic of Rani Lakshmi Bai of Jhansi, who fought against the British East India Company during Indian Rebellion of 1857. The movie will be releasing on 27th of April 2018 under the direction of Krish and banner of Zee Studios.

The life journey of Kangana Ranaut has never been less than a legendary artist, her stubborn behaviour towards the society that treated woman like an object has came out to be a very strong personality of a woman who has her own opinions, rights just to live like a “human being” which has been inspiring many girls around the globe.

Living in the Bollywood industry, but still having guts to speak against the wrong along with in favor of right is really a brave thing to do which proves her thoughts to be true and pristine. Her struggle, her personality can be clearly seen in her fidelity towards her work.

Standing with many true aspects of life, even having less communication skills in the English language, she has been part of laughter of many bugs in the industry but Kangana’s works have left every big producer, actor, and director irresolute. This may lead to abate her personality in eyes of some people with no humanity but she will always be praised by the common people, who love her true and inspiring talks.

We will her really well for Manikarnika- The Queen of Jhansi, hope this new Avtar of Kangana Ranaut will be loved by the people, also will open some of the very great aspects of Rani Lakshmi Bai’s life during her struggle. Although Kangana Ranaut has already proved herself as Rani Lakshmi Bai of Bollywood who has always fought against the unfair people.