Kavi Raz is the name which has given so much to Punjabi industry and to the audience as well. Previously he made Hollywood film on the life of Maharaja Ranjit Singh, starring Satinder Sartaaj as the lead actor of the film.

Afterwards, he made Punjabi film “Kande” which had a great message in it with a strong story and screenplay.

Kavi Raz has always provided movies which have promoted Punjabi cinema’s level and has always tried to put forward the things which each and every Punjabi should be familiar with.

We know that Punjab has great books and history, also it has a lot to tell us that why Punjab is so rich and how its culture is but today’s generation is far away from books, which is why we need entertainment packed things like movies to present a message and tell about our culture and richness.

This takes a lot of effort to go beyond the average films and do something which is not in trend but for sure it is worth making which will live years and years long.

You have to keep your money mindset aside to make a movie which is motivational and represents history and culture as these topics are very sensitive and need a lot to detailing and proper knowledge of all the facts to justify the characteristics of a film. 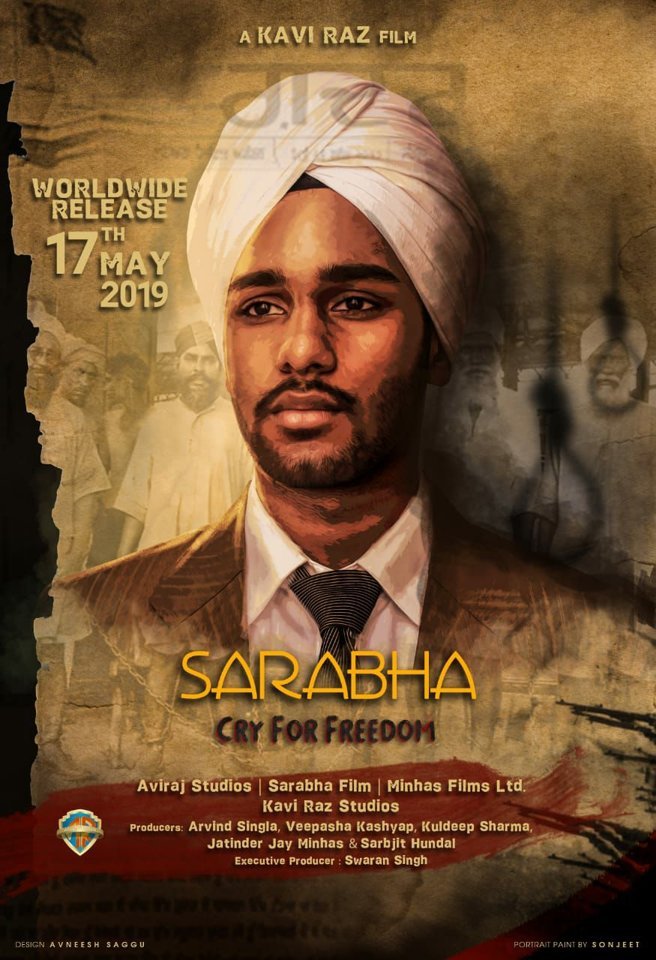 This is why we feel that the work which is being done by Kavi Raz is to be appreciated and has to be watched in cinemas to really feel something like “cinema and theatre”. As both these factors have much more than we can think of.

Now he is coming up with another film named as “Sarabha- Cry for Freedom” which will be a biopic on the life of Kartar Singh Sarabha, who joined Gadhar Movement for freedom of India, which was North America Based movement.

Not only this but, he is considered as the youngest freedom fighter who was hanged till death, when he was just 19 years old.

Sarabha is written and directed by Kavi Raz, the poster of this film was released on 24th October 2018 and shoot started on 9th November 2018. The movie is not just for the Punjab but, for everyone as it will be dubbed in English and Hindi as well.

Sarabha will be led by an actor who played the role of Young Mikha Singh character in Bollywood film “Bhag Milkha Bhag”, Japtej Singh.

Poster of Sarabha Punjabi movie shows the picture of Japtej Singh in character of Kartar Singh Sarabha and at the background, it shows the time of 20th century and a fade font which says “Gadhar Movement” typed in Punjabi.