Punjabi Cinema is growing day by day not in the case of high standard films but now it has been regularly giving us movies that are historical conceptual and make us think about our heritage, introducing us to culture of Punjab. After the films like SubedarJoginder Singh and Diljit Dosanjh’s Sajjan Singh Rangroot another inspiring tale is about to release in 2019.

The film is named as “Mitti: VirasatBabbran Di”. The film will be the directional debut of Hriday Sheety in Punjabi film Industry whereas another special fact about this film is that it is produced by Dream Girl of all the times, Hema Malini. Yes, you have read this right, it is produced by Hema Malini, after sons and her husband, superstar Dharmendra. Hema Malini is making her debut as a producer in Punjabi industry.

This also shows that how contacts of Punjabi cinema and Bollywood are getting stronger day by day. Previously Priyanka Chopra produced a Pollywood movie Sarvann starring Amrinder Gill and Sargun Mehta Dube under the banner of her production house Purple Pebble Pictures. On the other hand, Diljit Dosanjh is also doing movies in Bollywood and Punjabi songs are like some of the mediatory needs in Bollywood these days.

Hema Malini producing Punjabi movie Mitti Virasat Babbran Di is the latest example of good relations and bonding between Punjabi and Bollywood industry. The film will be releasing under the banner of H M Creations as main producer of the film and in association with Uttara Foods & Feeds Pvt Ltd.

“Mitti VirasatBabbran Di” will be starring Jagjeet Sandhu and Dheeraj Kumar as lead actors of the film who were recently seen in Diljit Dosanjh’s film Sajjan Singh Rangroot. 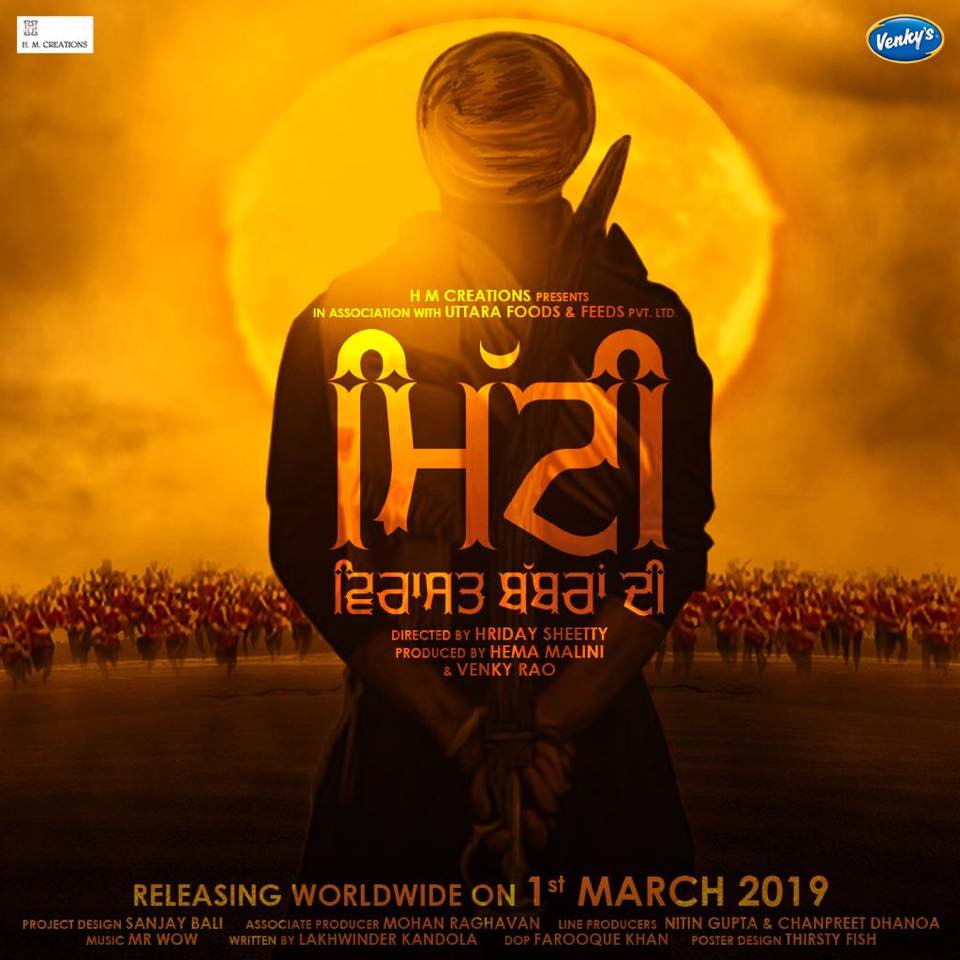 Poster of the film shows that a Babbar solider is standing wearing all the protection clothes along with this he is ready with his weapons to fight against Britishers who are standing in a group of many and are ready to attack as well. But the man is standing still and confident in the battleground.

Along with this the poster contains general information related to the movie. The poster is very attractive and somehow tells about the concept of this film as well.

Plot of this films seems to be a war drama film which may un-reveal the facts and information about the battle that happened against babbars and British soldiers. Babbars are not to be connected with a particular cast or region but yes it can be about the Sikhs and Sikh Soldiers because the poster shows a man with turban standing against many to fight. Babbar also means loin.