Rajkummar Rao is from one of the very young and talented actors of Bollywood and has built a remarkable personality in the field of acting, not just with their talent and looks but also with the best path to choose. Rajkummar Rao is basically from Gurgaon, Haryana and started acting and dancing just when he was in 10th standard, always wanting to be an actor as he comes from a joint family in which everyone is really crazy about Television and Movies.

From childhood, he has been in an environment that on the weekends the whole family used to watch 2-3 films in a day and enjoyed them. But Rajkummar Rao had a dream of being the part of VCR or DVD’s screen, rather than be one from the audience. After completion of metric he went for arts stream and during 2 years he did diploma in acting from Shri Ram Centre in Mandi House, Delhi. Also, he worked with Bharti Sharma for about 1 year and kept gaining experience over there. Also during the time, he completed his graduation in Arts from Aatmaram College.

Now, all that he did was going to play very important in his selection in Film and Television Institute of India, Pune (FTII). Luckily he got a chance to be part of such a great Acting School of India and most of the experience in his career he gained it from FTII, as he watched World Cinema and other types of theatre also in a talk Rajkumar tells that his true journey in the field started from FTII as he got to see that this field is so vast, also there are many legendary artists who are far better than of a fresher. He could imagine the level of acting he would have to learn to compete with such great personalities. He tells that he is inspired from world cinema artist, the three times Oscar winner, Daniel Day-Lewis who holds both British and Irish citizenship. Rajkumar is very impressed by the dedication of actor during his work and his style to handle his character during the shoot.

From Indian cinema, he is impressed by many legendary actors like Dilip Kumar, Amir Khan, Irfan Khan and Manoj Bajpayi. After completion of his master course from FTII he went to Mumbai for the real struggle and live his dream of acting, as he belongs to a gentle and middle-class family, he never faced too many problems for the basic needs, also his family had always been very supporting to him and has never forced him to study in previous times as well, as Rajkumar was already very sincere towards his responsibilities and works that he had to do.

In an interview, Rajkumar said that his struggle period lasted for around one and a half year in Mumbai and during the times he went for many auditions for ads, Shot Films, Television and more. But many time his luck failed to go ahead with him as sometimes he was rejected, sometimes he got to select in movie but movie startup failed due to lack of funds and sometimes movie fails to release due to some reasons, as he was trying his best every day but his family never pressurised him or asked him about his work. And this was what encouraged and satisfied him during his struggle.

Finally one day, when Rajkumar was reading a newspaper and he found a headline that reads that Dibakar Banerjee (well known for films like Khosla Ka Ghosla and Oye Lucky! Lucky Oye! Both of the films got National Award) is making a film named “Love Sex Aur Dhokha” and he wanted a star cast of all new actors. Then he grabbed the opportunity and went for audition for the film, there he met Dibakar Banerjee’s Casting director Atul Mongia (very talented casting director known for films like Queen, Shor in the city, Lootera and many more), who get through Rajkumar’s background and called him for the auditions, after 2-3 times auditions he was chosen for the role and there he was for his first debut film in industry Love Sex Aur Dhokha.

After this, he became so popular in the industry and did regular movies after that, when he was asked about what is the reason behind his success and why he had never had to look back after coming into Bollywood industry. Then he revealed that the roles he does are very simple and very close to a common man. In Delhi, during his studies, he used to keep a diary with him and he noted down all the things that he has seen and observed in a day that on things like, how normal people behave in their lives and how they react to different emotions and in a realistic world. And this is how he performs in the films, from action to cut,

He plays his role with very honesty and also he puts himself in the character along with watching himself in the place of actor, not being himself. He told in an interview that he has never thought of camera or film during he is playing the role of a character in a movie, and he himself disappears from him when he is playing a role, it’s just the character of the movie, nothing else. Also, he did roles of a common man in every movie and didn’t go for imaginary scenes of a hero beating 10 people a time or more, and that is why he is loved by the audience so much.

As many of the strugglers in the industry are there and on media channels they say that casting directors do partiality with the newcomers and give a role to those who have money and power to convince them, they further add that as strugglers they have skills to do acting but aren’t in line because of such reasons. On this, when Rajkummar Rao was asked for the truth then he laughed and said “One must be sure that “he has acting skills” is just a statement that satisfies himself only or also the person that is judging you at the same time”. Basically he rejected that excuse and told that most of the strugglers go for gym and facials to look good on camera and after that for acting, but as an “Actor” your first priority should always be “Acting”, not the looks, and this is the reason that they lack the basic thing that is needed to be an actor, so if you have skills, you will defiantly be chosen by directors and getting in touch with casting directors is only the way to reach Bollywood, as no director meets you directly and they don’t have time to judge a newcomer, that’s why they have a casting director. And you have to impress casting director first, and then it will come to a director and more.

After film Love Sex Aur Dhokha in 2010, Rajkumar did Ragini MMS and afterwords movies like Gangs of Wasseypur and Shahid in 2012, he did leading role in Shahid and he was the main character around which the whole movie revolves and he was that good in the movie that he got “National Film Award” for movie Shahid. This is the very first time in the history of Bollywood cinema that an actor is honored with such a big Award in almost just starting off his career.

In 2012 only, he got to work with most popular and loved personality Amir Khan in his movie Talaash. In 2013 he did “Kai Po Che” with Shushant Singh and “Queen” with Kangana Ranaut which became a blockbuster of the year 2014. After this, he was seen as a lead in City Lights as Deepak Singh in direction with Hansal Mehta. 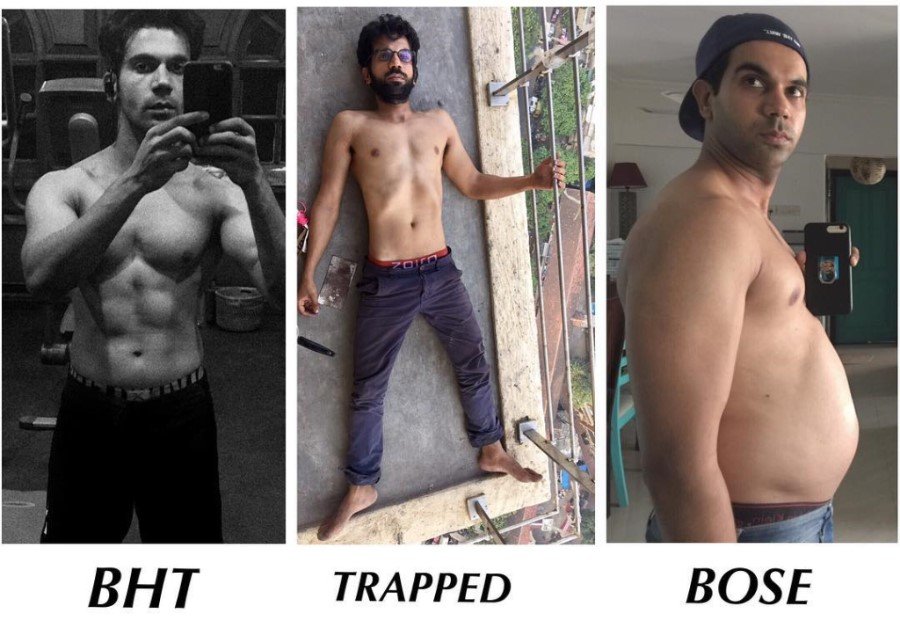 In 2015, he did movies like “Dolly Ki Doli”, “Sabki Bajegi Band”, “Hamari Adhuri Kahani” (In supporting role with, Imran Hashmi and Vidya Balan) and one with his favorite actor, Manoj Bajpayee “Aligarh”. Also for “Aligarh” he was honored with three awards;

In 2016 he did one movie named “Trapped” and now in 2017, his three movies are been released, “Behan Hogi Teri” in June, “Bareilly Ki Barfi” in August and now it’s “Newton” in September and is running in cinemas very successfully. Although this movie was opened to 430 screens only on 22 September and in just 6 days it has crossed 10 crore mark. This is getting stronger day by day because it has been officially announced that this movie is going to be in the nominations for Oscar this year. In this film, with Rajkummar Rao, Raghubir Yadav and Pankaj Tripathi are also there.

Anyways, the actor believes that he has never thought of his movie in numbers, that it should cross 100 crore mark or something he has always respected his work and chose good scripts, also he adds that he wants to be such successful actor that after he is gone from industry of world, nearly about after 100 years when one takes name of top 5 most talented and promising actors of industry, and he be in those 5 names. He doesn’t want to be counted under “Five most rich Actors of industry”.

So with this, we wish him all the very best to him for Newton and his upcoming comedy tale “Funney Khan” in 2018 with Ashwariya Rai Bachchan and Anil Kapoor in direction of Atul Manjrekar.