Subedar Joginder Singh Movie is an upcoming Pollywood flick which is to be released in 2018 along with which as the name clears, the movie is based on a name that is lesser known to the Punjabies and the world but soon with this release, will be known worldwide.

Moreover, you can believe us this too that you will be feeling very proud after getting into this character, knowing Subedar Joginder Singh who was an Army man grown up from a family background belonging to farmers. Later this man was about to do the most uncommon sacrifice which is not for one’s family, not for a person, not even for his goodness but yes for the country which includes himself, us along with the family.

Gippy Grewal along with his singing skills has always proved himself on the screen as well which makes him a good actor as well, people have always loved his work. May it be his debut film Carry on Jatta or may we take name of Jatt James Bond which has attracted audience very well although the movie like Ardas which is directed by him is also one of his master pieces which has shown his acting skills as well, but during the ending of this film.

In a live video he shared his experience of doing this movie in which he revealed that for him and the team this movie was next to impossible task as the biopics are never easy for one to make, this is something very special because it includes a very brave army soldier, the army scenes that has to be created for a movie like this also till now the Punjabi cinema has never came up with this kind of movies ever. For this film Gippy Grewal has to lose his weight for one time and another part of the movie asked for gaining the weight double to this for which he said that become very difficult for him to do the movie but somehow he maintained the look of Subedar Joginder Singh which he has seen during the time he went to Singh’s house and met his family.

Moreover this biopic does not only includes the hard work of a team it has also included a dream in it which was waiting to become real from last 55 years, this dream is of making a film on the life of Subedar Joginder Singh which was seen by Subedar Joginder Singh’s youngest daughter Smt. Kulwant Kaur 55 years back so that people should know his father’s sacrifice for the country over self and over everything that can stop him for doing this.

Subedar Joginder Singh was an Indian army soldier who was a part of World War 2, which made him fight in Solo Indian War, happened in 1962. He was commanding a Platoon during the war at Bumla. Subedar Joginder Singh was born in Mahakalan village near Moga, Punjab. Although the life was never easy for him even before he entered the army as the family was going through a very bad phase of life due to which they were already facing financial problems.

Due to which Joginder Singh’s study was left in the middle but later he passed Army exam which made him choose his own destination. He was the recipient of Param Vir Chakra (which is India’s highest Gallantry award). He got this because of his one of the most difficult sacrifices that one can do for the country.

The first look of Subedar Joginder Singh Movie is already released by Gippy Grewal on his Facebook timeline on which the official date of the movie is not announced yet but the year is mentioned that is 2018. The poster includes only leading character of the movie that is Subedar Joginder Singh, whose role is done by Gippy Grewal in the Singh’s avatar. 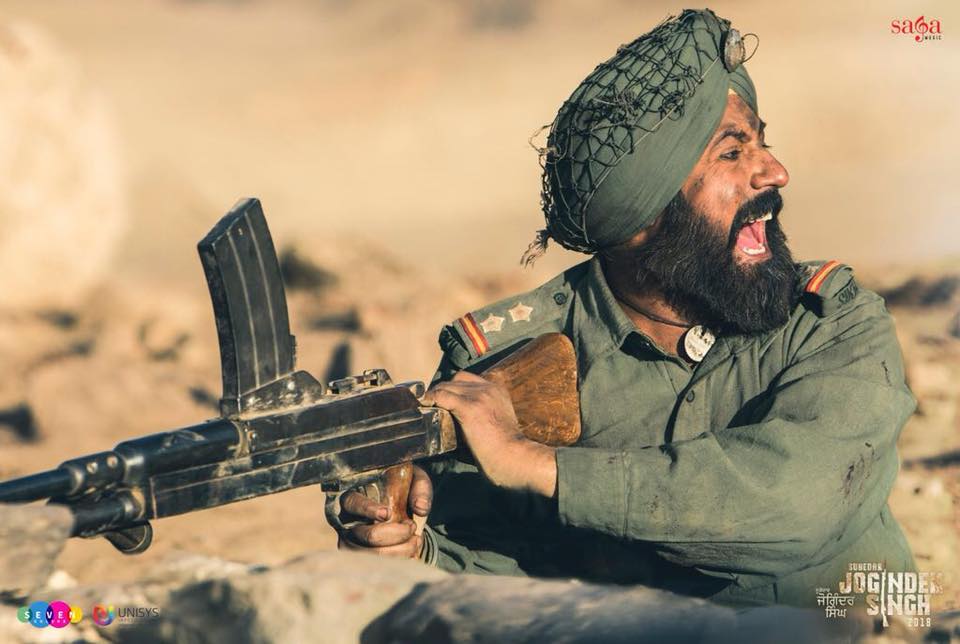 Also it includes the name of producers of the film, Saga Music and Seven Color Motion Pictures. There is one more poster that is released of this film, in which Gippy Garewal (Subedar Joginder Singh) is shown as having a rifle in the hand, although he is fighting the battle and calling his army mates for the same. This is really very attractive along with which it shows the dedication of work done by Gippy Garewal in the film.

Coming to the movie, the movie is produced by Sumeet Singh of Unisys info solutions along with Saga Music Company. The direction of the film is done by Simarjit Singh. Actors that are part of the movie are Gippy Garewal in the leading role in and as Subedar Joginder Singh, Kulwinder Billa, Roshan Prince and the legendary actor of Punjabi industry, Gaggu Gill who is said to be playing a very important role in the film.

This movie will be really a very new and fresh chapter for Punjabi cinema along with the Punjabi viewers. The movie will be generating a very honest message to the society which will also be raising the respect of Indian army in everyone’s thoughts.