Yaara Ve is the name of the upcoming Punjabi film that will enlighten our memories of childhood and especially the people who live in villages of Punjab and have spent their childhood in the streets of their villages.

The remembrance of these beautiful memories is already made by the poster of this film which holds the title of the film and a quote “it begins from the age of innocence”. The leading actor of the film is Gagan Kokri and actress is Monica Gill. YaaraVe will be releasing under the banner of Golden Bridge Private Limited and is directed by Rakesh Mehta, who is well known for his movies like Vaapsi and Nanak in Punjabi Industry.

The lead actor of this film GaganKokri is well known singer in Punjabi music industry and unlike many Punjabi singers, he is also from them who have acting skills as well. He is well known for his songs like Blessings of Bapu, Asla, JimidaarJattian, Jachdi, The return of Asla and many more. And Laatu is Gagan Kokari’svery first movie and his debut as an actor, this is going to release on 16 November 2018 along with Aditi Sharma as the lead actress of the film.

Monica Gill is the lead of this film who is an American Punjabi model and actress along with this she is also Beauty Pageant Holder. She won Miss India Worldwide in 2014, along with this she won Miss India USA in 2013. She is well appreciated for his work as an actress in Punjabi films as well. Movies like Ambarsariya, Kaptaan, Sardaarji 2, Sat Shri Akaal England, Firangi (Bollywood) and many more are the films that she has worked in so far.

Hopefully, this film will also boost his and Gagan Kokri’s career in the Punjabi film industry.

Poster of YaaraVe Punjabi movie is very attracting and shows that some children are bathing on a Bambi or River while throwing water on each other. One child is sitting on a buffalo and is wearing a red nicker and dancing his hands upside in the sky. 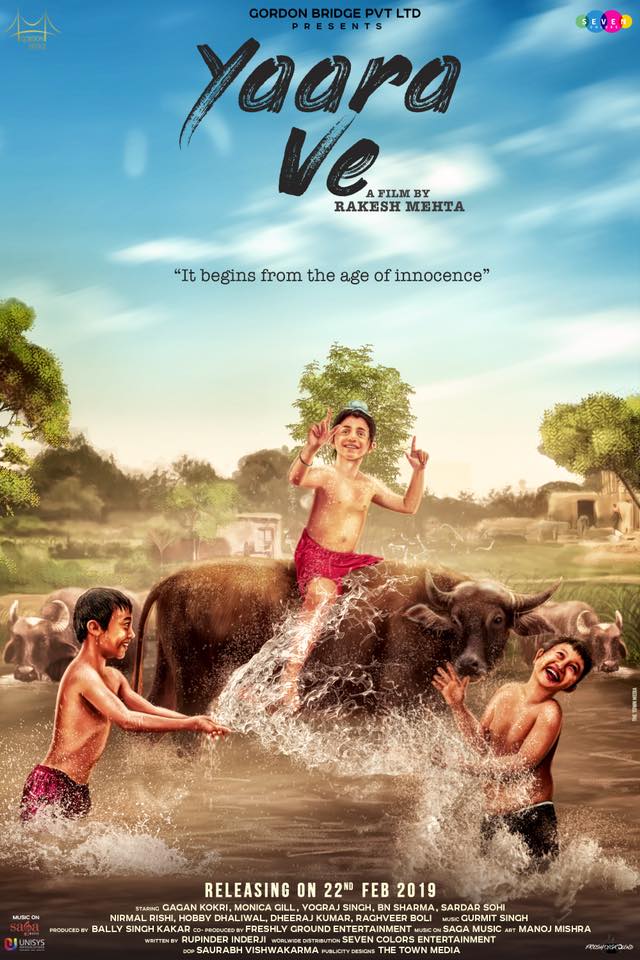 The background shows the scene of a village with some forest, houses made with the soil and trees along. This seems to be very happy view of the film and poster design is very realistic.

Other than this it contains all the information about star cast, crew and production of the film.

The release date of YaaraVe Punjabi movie is said to be 22nd Feb 2019.

Trailer of Punjabi movie YaaraVe has not been released yet.

No song of the movie is released till now.