Baraat Bandi Movie is the name of upcoming Punjabi movie starring Sharry Mann and Ginni Kapoor. The film is directed by Ravi Verma and will be releasing under the banner of Dream Work Productions and Star Entertainers.

Sharry Mann and Ginni Kapoor are playing leads in this movie and we all know that Sharry Mann is one of the most popular Punjabi singers and has also appeared in various movies in lead and as well as supporting roles. Like he played the lead in Ishq Garari and Oye Hoye Pyar Ho Gya. Whereas he also played supporting role in movies like Nikka Zaildar and Super Singh. One more film named as Hun Nahi Murde Yaar is also being associated with his name and is also said to be one of his upcoming projects.

Ginni Kapoor is a Punjabi model and actress who first appeared in Preet Harpal song Black Suit and nowadays she is dealing with a number of advertising companies and in gaining a lot of fame in the ad industry. She is a well-known model and now will be appearing in Baraat Bandi as an actress, it will be great to see that what type of response she will be getting from the audience for her work.

On the other hand same is applicable for Sharry Mann because he is greatly accepted as a singer all around the world but as an actor, he seems to be a little behind the popular actors. Maybe this is the movie which will boost up is career as an actor as well.

Trailer of Baraat Bandi Punjabi Movie has not been released yet. 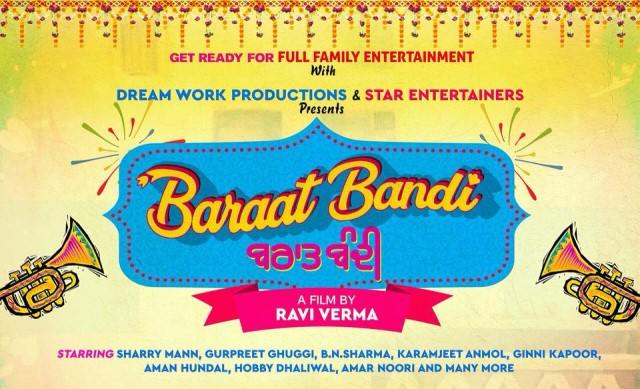 The first look of Baraat Bandi is here which contains no picture of any artist but just holds colourful animation in which Baraat Bandi is typed in English and Punjabi. Along with this it contains some information regarding the release date, star cast and production of the film.

Baraat Bandi Movie songs has not been reviled yet but hopefully, we may have the songs penned and sung by Sharry Mann. As he has given such a great music in his previous films as well.