Kala Shah Kala is another film of Binnu Dhillon after the huge success of VadhaiyaanJiVadhaiyaan. This will also be a comedy film based to a whole different and new concept. Binnu Dhillon about the script of this movie said that he loved it in very first reading and got ready for the project. The script is written by Amarjit Singh and the same name goes for the direction of Kala Shah Kala.

The film will be releasing under the banner of Naughty Men Productions and world wide distribution will be by Omjee Group.

Binnu Dhillon is a brilliant actor and is full package of emotion as well as comedy. He is from some of the actors who are really with a background of acting and have learned acting with proper studies. He has done various films like ChannoKamliYaar Di, VadhaiyaanJiVadhaiyaan, Bilaras and many more.

Sargun Mehta has done number of films in Punjabi film industry and she has been seen as a model in some Punjabi songs like Qismat which was huge hit of Ammy Virk and the video of song was loved by audience. Now after that both of them recently appeared in Qismat Punjabi Film.Sargun Mehta Punjabi movies like Lahoriye, Angrej, Qismat, Love Punjab and many more have been super hit films and are favourite of all the times.  Along with Kala Shah Kala, she is busy with the shoot of Punjabi movie Chandigarh Amritsar Chandigarh with Gippy Grewal.

Poster of this film just contains a sort of information about the star cast production and directional details, official poster will be out soon. 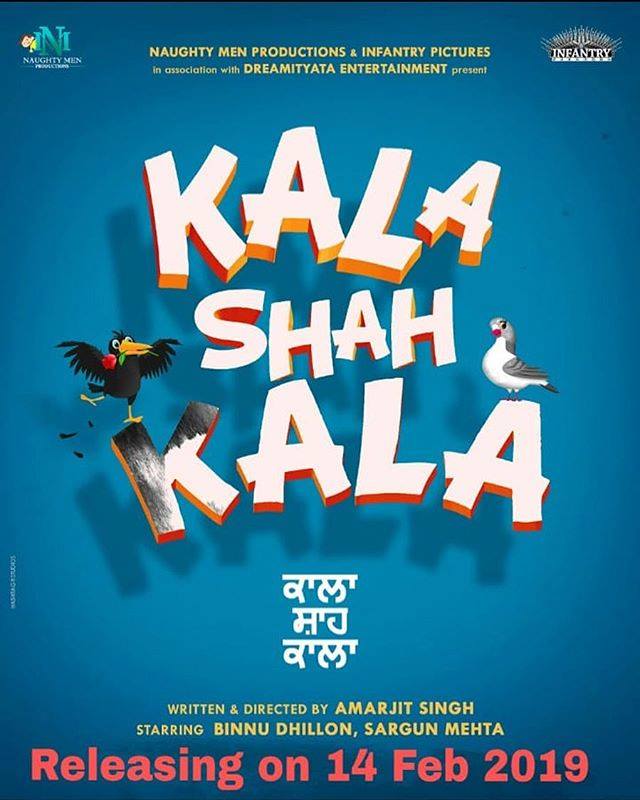 OTHER INFO AND HIGHLIGHTS OF KALA SHAH KALA

Highlight of this film is that Jordan Sandhu, who is a well-known singer of Punjabi music industry will be making his debut with Kala Shah Kala.

Storyline of Kala Shah Kala is yet more interesting, the title of film is taken from Binnu Dhillon’s character of “Kala” in the film, who is having difficulties in finding love because of his dark complexion.

Stars like KaramjitAnmol, Sangeeta Sharma and B N Sharma will also be seen.

Direction and script of the film is done by Amarjit Singh.