KITTY PARTY MOVIE: Arri Production House in associate with NavBajwa Films presents Kitty Party, upcoming Punjabi film is going to be next great film in Punjabi industry. Starring Jaswinder Bhalla, GurpreetGhughi, Upasna Singh, Harby Sangha and many more this seems to be a pack of comedy. But as such there is no confirmation about the exact topic of this movie.

Kitty Party is directed and written by Nav Bajwa who is well known for his direction in movies like Raduaa and Ishqaa. Although he attracted the audience in 2007 when he won the dance show Aaja Nach le that used to telecast on Mh1. Then he worked as an actor in many Music Videos, he has worked in more than a hundred music videos till now.

He made his film debut with Punjabi movie Pure Punjabi in 2012 and the journey goes on, he anchored a reality show on PTC Punjabi named as “Mr. Punjab 2015”. He is well known for his work in various Punjabi films like fateh, The Mastermind: JindaSukha and many more. It will be interesting to see that what he is bringing this time by the upcoming Punjabi movie Kitty Party.

Jaswinder Bhalla, Gurpreet Ghughi, Upasna Singh and HarbySangha are the named that fill out the surroundings with laughter and are very well known personalities of Punjabi Cinema. Let’s see what is different in this film and what will be the topic this time.

Trailer of Punjabi movie Kitty Party has not been released yet.

The first look and poster of Kitty Party Punjabi movie has been released and it shows no star on the poster but yet a very unique concept. The poster shows a dining table surrounded with 4 chairs and in centre a bowl filled with notes of 2000 and 500 is there. 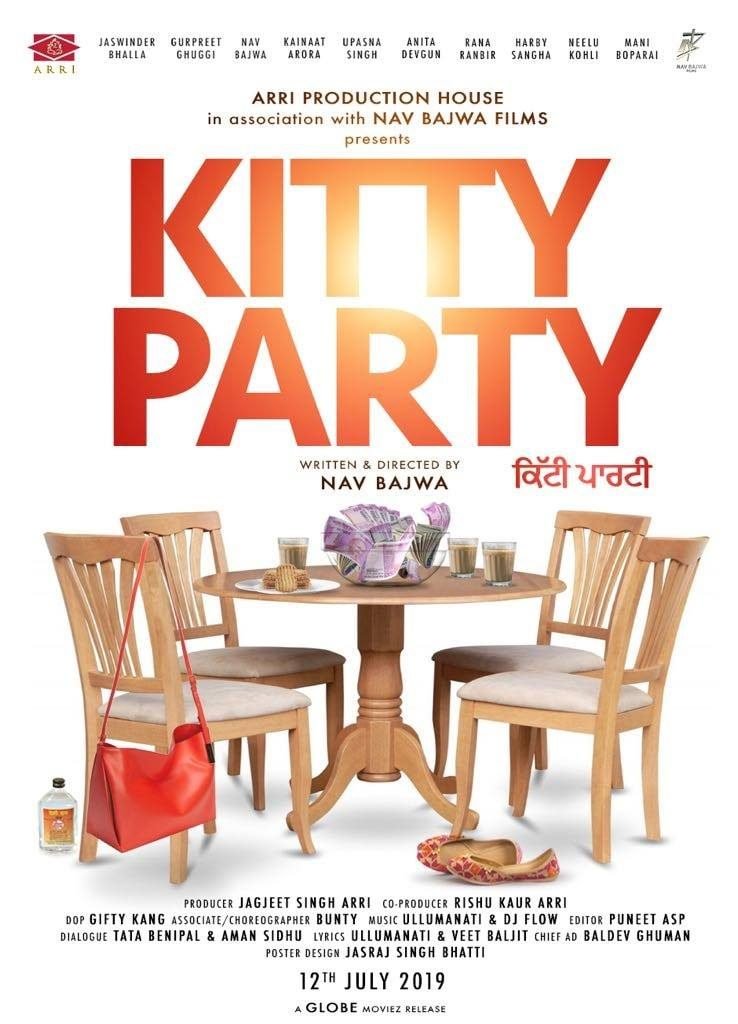 Around with there are some glasses of tea and some snacks are laying. Surroundings of this dining table show a chair with which a red coloured bag is hanging and a small bear bottle, also a pair of jutti. Other than all this poster contains the basic information regarding the start cast and release date of the film.

The poster seems very interesting and exciting. And it is designed by Jasraj Singh Bhatti.

The release date of Punjabi movie Kitty Party is 12 July 2019.

No songs has been released yet.