Mahi Dhaliwal is a great performer and rising star of Punjabi Music Industry. Who’s debut song is already out on PTC Punjabi, Chakde, 9X Tashan and YouTube named as “Waiting Ch”, written by the very popular writer of Punjabi Industry “vinder nathumajra” under the banner of Angel Records.

Always wanted to become a singer along with belonging from a family that is itself an artist family adds more to one’s personality. Both brother and sister of Mahi are singers, although the talk doesn’t end here, her sister is a national level winner in singing. 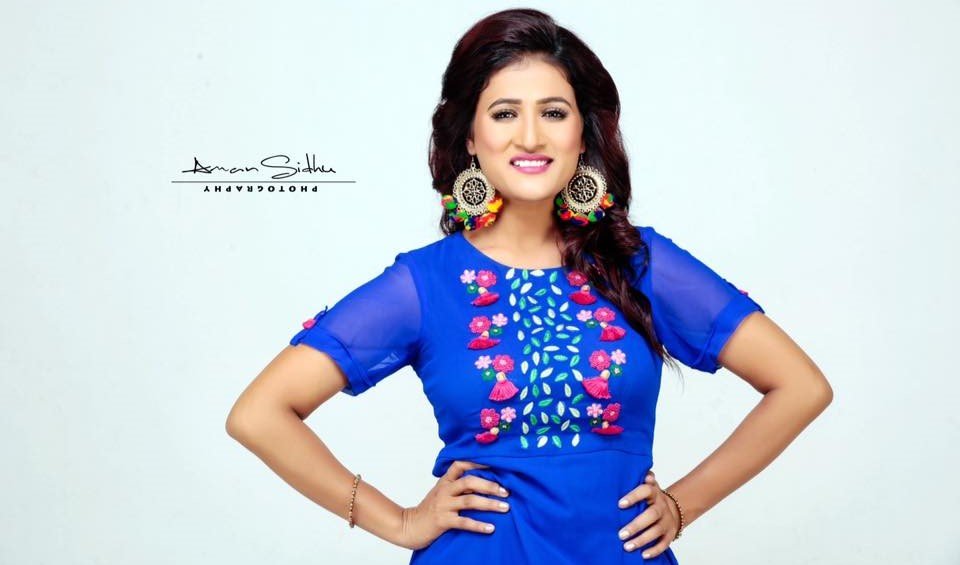 Mahi Dhaliwal tells in an exclusive talk with PunjabDreams.com that she is a born artist, moreover with the home environment; the artist in her could not compromise to just remain inside and came up with making her sing every time she is in the home or outside. Hence, Mahi started singing by getting the environment in her home. Basically, she belongs to Rampura Phul, Dist. Bathinda, Punjab. She completed her schooling in Rampura and in +2 she got her very first gold medal for her best singing in a competition, till now; Mahi never learned music from anyone but still got a gold medal in school which was the first step that realized her that she owns this special quality of singing.

Mahi did diploma in Information Technology from Government Polytechnic College, Bathinda. In her very first year, when she was selected for the youth festival in singing, she met her very first coach, “Rami” from Bathinda itself, who taught and guided her for the betterment of her singing skills. He also told Mahi that she has a good voice and she can be a good singer one day. The result of her hard work for youth festival came out to be very positive, which rewarded her with another gold medal. After this, she started official music training from her coach “Rami”, during which she learned many other singing styles like classical, Gazal/Geet and the very difficult, Punjabi Folk singing.

Pursuing her studies in Engineering because her mother wanted one of her child to do something other than singing, as both her siblings left their studies for music, but she didn’t want to be another personality in the same line, that’s why she continued her study as bachelor of technology from Malout Institute of Management and Information Technology, Malout (Also known as MIMIT, Malout).

Mahi Dhaliwal feels that MIMIT is from one of the biggest platforms on which she has performed, as there were many functions organised by the college and she was part of almost every function during her graduation moreover, she won many gold medals during events like talent search and youth fests in many type of different singing categories. She regards her professors Iqbal Singh Brar and Gurpreet Sony who always encouraged her to do better in every aspect.

For now, Mahi Dhaliwal currently lives in Chandigarh, also finds this city as her favorite place along with Mumbai. She told PunjabDreams.com that Chandigarh changed her living standards for better, as she remained more disciplined about her goals and achievements she wants to have in life. Every next day of her life in the city beautiful is pre-schedule accordingly. It has been 4 years till now that she has been in living in the city, now she is pursuing her MBA from Lovely Professional University along with her singing career. Her latest debut song Wating Ch is running very successfully on YouTube and is loved by the audience.

When asked about the difference between old music and today’s music according to her, to this, Mahi Dhaliwal gave very honest answer by saying that previously the songs had many different concepts but for today’s generation it is just opposite, everyone wants to listen to songs on beats, similar touch just like the previous release and rhythm. there is nothing called as the melody in the songs that are been released every single day in the industry. That is why there are almost no songs that one can say will remain till long or any of them will be remembered for old songs. This is the reason she chose a song for herself that has a different concept, melody, and remembrance in composition.

Mahi Dhaliwal’s favorite color is pink. She loves to have Sarso Da Saag and Gobhi in her meal. She has sung many songs of Surinder Kaur during her career. Her best friend list includes Yadwinder Singh, Manisha, Kamal, Ruhika. Her future song is also getting ready and is written by the same writer “Vinder NathuMajara”.

We wish her all the very best for her further projects and may she keep her hard work up, which further lead her towards more fame with success in the field.