2.0 Movie Starring Rajinikanth- 2.0 is the name given to the upcoming film of Akshay Kumar and hero of all the time, Rajinikanth along with Amy Jackson. This is also expected or assumed to be the second part of the previous masterpiece by Rajinikanth that was along with Aishwarya Rai Bachchan named as “Robot” in Bollywood and named as Enthiran as of Tamil language. Rajinikanth had a dual role in the previous movie, one of a robot that was an extraordinary human machine and falls in love with his master’s love. Another was the role of the master, which was also done by Rajinikanth himself. The film was blockbuster at that time and was extremely successful in the cinemas. The movie was released on 1st of October 2010. Before that in 2008 Rajinikanth confirmed that he will be leading the movie for 45 million Indian rupees. The movie was directed by S. Shankar and co-written by him with Sujatha Rangarajan. In total the movie collected 2.9 billion Indian rupees including the original and its dubbed versions as well.

The Bollywood Khiladi, Akshay Kumar will be seen as a villain in the film as Doctor Richard that would be its normal Avtar and another will be of Crow Man that has been seen in some posters and in a recently leaked making of the film, the character looks too dangerous with its looks, makeup moreover with the impressions that he had mad which shows the seriousness of this character. This science fiction tale will be releasing on 25th of January 2018. Akshay was very happy when he came to know that he is been selected to work with the legend Rajnikanth, in the second part of so popular tale Robot.

Not only this but this is the first Indian movie with so much of budget till date, that is expected to be around 450 Crore Indian rupees that what makes it one of the most expensive movies of cinema. The reason becomes very strong here as this is the first Indian movie that is being shot directly in 3D for the very first time and to be mainly released in Hindi and Tamil but will be releasing in around 15 languages all over the world.

The pre-production of the 2.0 movie was started in June 2015. The script of the movie was completed by Jayamohan Shah in September 2015 with the help of dialogue writer Madhan Kanky. The 2.0 movie was supposed to be the sequel to Robot and the storyline will be starting where it ended in the previous but later in June 2016 Pookutte revealed that the movie will not be a exact sequel to the previous one but a spiritual successor either.

This was one thing another is about Akshay Kumar that how he has been selected for the project, the director of the film S. Shankar had his initial discussions with actors like Amir Khan, Kamal Hasan and Vikram for the villain role but no one was ready to sign due to one reason or another then he went to Hollywood actor Arnold Schwarzenegger, who agreed for the role but later had some problems with the team or another so that he has to quit and after that Akshay was offered the role and this is how it finalised.

Nirav Shah joined the technical team of the film as a cinematographer in June 2015 and visited special effect studios United States to research about the making of 3D shoots.

About the Poster, First impression:

The poster of the 2.0 movie was released very early and there is not one till now, makers have released 3 posters till date and each one of those have a different look and style. Two posters are those who have individual pictures of Akshay Kumar and another with Rajinikanth where as one poster includes both superstars looking at each other whereas looks of Akshay are very dangerous which make it difficult for one to realize that it is Akshay Kumar himself, the Crow Man in the movie looks really a villain that will be difficult to handle as well. 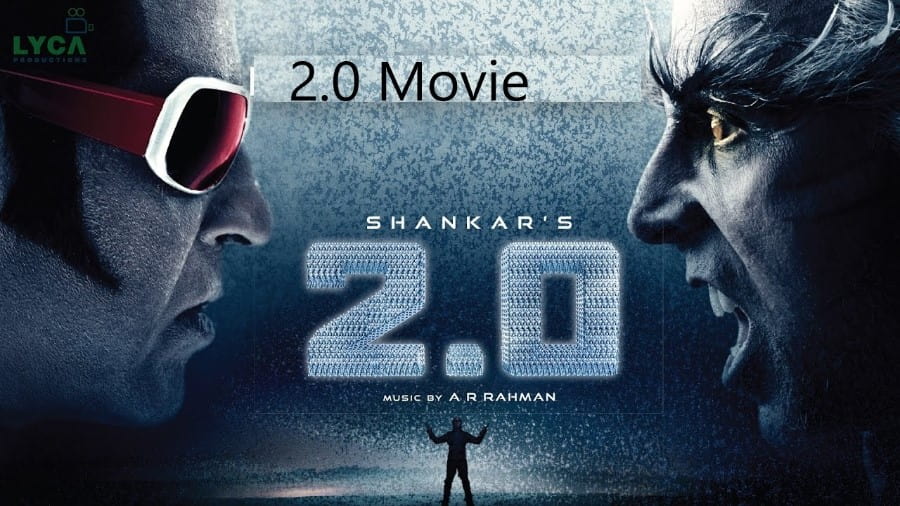 On the other side we have Rajinikanth who looks like character “Chitti” just like his past film. But still is successful in creating a totally new look than before. The poster which contains both the superheroes looking at each other contains a tag line and here it goes “The world is not only for humans”. Of course all of them contain name of the film “2.0” and director’s name along with name of the legend “A R Rehman” as Music by A R Rehman.

Additional info and team of 2.0 Movie:

A part of S. Shankar (Director of the film)’s team behind the whole 2.0 movie is same as in the previous work of movie Robot of 2010 like the music composer A R Rehman, Rajinikanth but this time under the banner or Lyca Productions which has produced the movie, for dialogues it is Jayamohan is added. Art direction is done by T.M. Muthuraj whereas Visual effect supervisor is V.Srinivas Mohan. Nirav Shah joined the technical team of the film as cinematographer and has shot the movie in directly 3D effects.

Resul Pookutty is the sound designer of 2.0 movie whereas Legacy effect have taken the responsibility for animatronics of the film , Legacy Effect is an American special effects studio which has specialization in creature designing, prosthetics, make up, animatronics and along with the speciality in costume designing. Mary E. Vogt is the costume designer, stunt choreographer is Kenny Bates and Visual effect directors are John Hughes and Walt Johns.