movie which is produced by Dharma Productions (Karan Johar’s Production Company). In this Akshay Kumar will be seen in all new Avtar, wearing a turban and having a heavy beard just like Sardar or Sikhs. Kesari in general means Lion and this will be a period film based on war.

The film will be directed by Anurag Singh, director of various hit Punjabi movies like Punjab 1984, Disco Singh, Jatt & Juliet both parts, Super Singh, Yaar Anmulle, Dil Bole Hadippa and many more. He has been awarded Best director award various times for his Punjabi films and has gained a lot of appreciation around the world.

Bhagya shree and Parineeti Chopra will be leading actresses in the film along with Akshay Kumar.

Akshay Kumar is a very famous actor of Bollywood and he has always been very conscious for his work and is well known for his fitness and strict schedule in making of every movie he does.

Akshay Kumar has done so many films in Bollywood and also as a leading actor in almost every film that he has been listed in one of the most successful actor at box office in the history of Indian Cinema. He is coming up with some grand movies ahead, one of which is 2.0 with Rajnikant and another is Hera Pheri 3 along with Sunil Shetty and Paresh Rawal.

Bhagyashree has appeared in various Bollywood movies and in some Marathi, Kannada, Bhojpuri and Telugu movies as well. She started her career from television by playing a character of Alka in a TV serial Kachchi Dhoop and has done many films like Maine Pyar Kiya, Tyagi, Paayal, Hawas, Red Alert and many more. She will be playing role of Ishar Singh’s wife in her upcoming project Kesari.

Parineeti Chopra is the sister of Priyanka Chopra and she made her debut in the industry from film Ishqzaade along with Arjun Kapoor, who also made his debut from this film.

The movie was a great success and Parineeti got many good roles after the success of Ishqzaade. She was awarded for best debut actress for the same. She was also the part of huge blockbuster hit Golmaal Again (2017). She has won many awards including Filmfare and National Film Award. Parineeti Chopra will be playing role of Ishar Singh’s Daughter in the film Kesari.

The film is based on the story of HavaldarIshar Singh who participated in an army of 21 Sikhs that fought against 10,000 Afghans in the year 1897 in Battle of Saragarhi.

Kesari is scheduled to hit cinemas on 22nd March 2019. 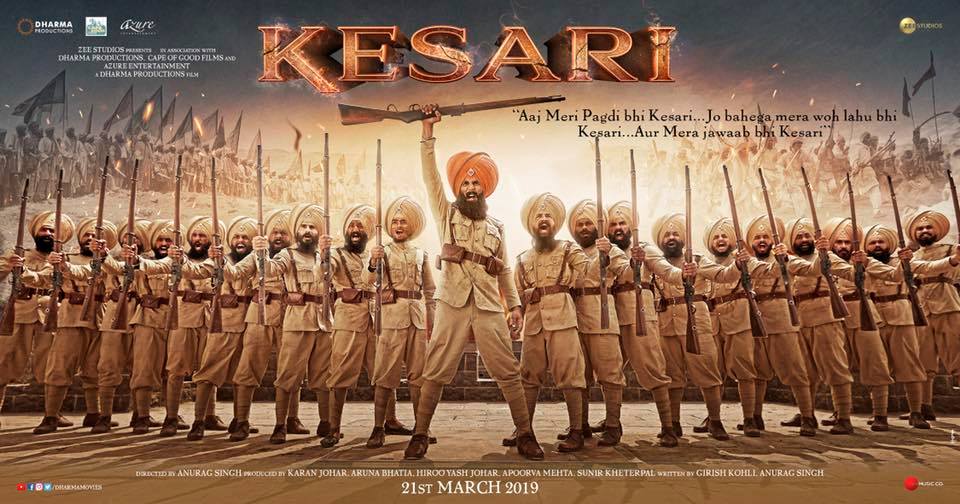 Trailer of Kesari has not been released yet.